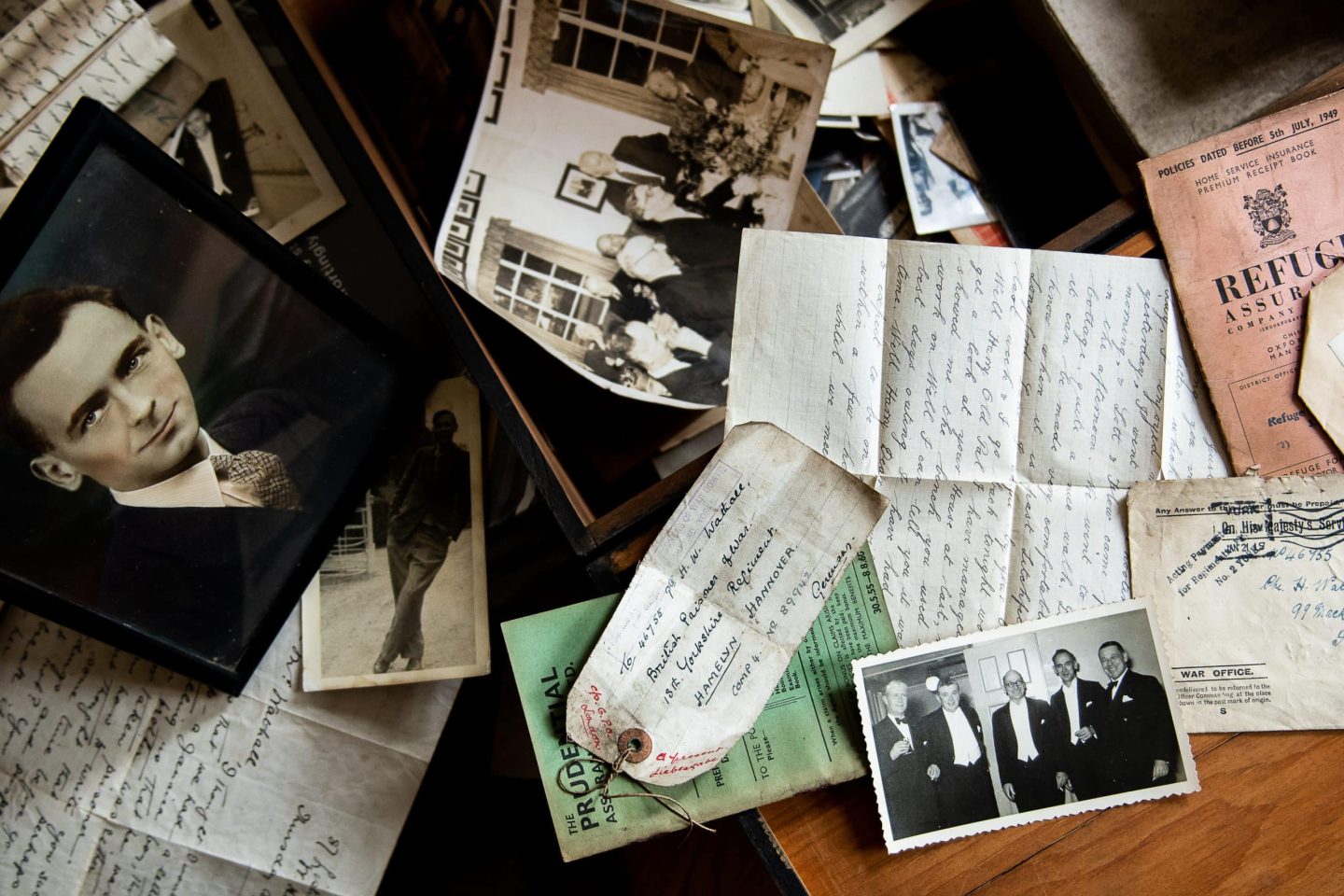 When Bec Wathall flies to Berlin in December, it won’t be for the bars, the nightlife or the shopping .

No, the twenty-five-year-old from Ashbourne will have a much more serious purpose in mind.

For despite her young age, Bec is on a serious mission to learn as much as she can about the First and Second World Wars.

Acknowledging that this might seem a bit strange to others of her generation, she explains: “My interest in these events has developed into quite an obsession really. And it’s all been triggered by a box of old family letters, postcards and photos that mum and I unearthed by torchlight in my grandma’s garage recently.” “What we found proved incredibly fascinating. We learned about what happened to mum’s grandfather, Harry Wathall, in the First World War. The letters, documents and postcards revealed things we didn’t know about his capture by the Germans as he fought in the trenches in France. And the time he spent as a prisoner of war in the Soltau camp in Germany, reputed to be one of the worst to be sent to. Incredibly he was only 18 and had never been away from home before.”

Bec and her mum Helen Wathall, who is managing director of Derby-based funeral directors Wathall’s,  came across the treasure trove of documents while researching the family archives in preparation for their recent Open Day to mark the family firm’s 160th anniversary.

“It was a revelation to us as my grandfather never talked about his experiences in the Great War, especially his capture and imprisonment by the Germans,”  Helen, 52, tells me. “So we never really knew what he went through. But now we have more information, although the postcards he sent back to his family in Derby didn’t reveal much in the way of detail. He just said he was ‘quite well’. I don’t think prisoners were allowed by the German authorities to say more than that. And they could only send postcards, not letters.”

It emerges from military documents that young Harry, serving his country as a Private in the 13th Yorkshire Regiment, was captured on April 10, 1918, when the Germans completely surrounded the trench he was fighting in.

Initially Harry was reported missing. A letter to his family from the No. 4 Medical Board Base Depot in France, explained the circumstances of April 10. There had been an ‘exceptionally heavy bombardment’ by the Germans, which was met with ‘an excellent fight against overwhelming numbers’.

It later transpired that Harry had survived and been taken to the Soltau prisoner of war camp in Lower Saxony. He remained a prisoner until the war ended in November 1918. “We don’t know how he was treated in the prison camps but my research has revealed that a lot of prisoners were put to work in the salt mines,” Bec says.

“Happily, Harry eventually returned to Macklin Street, Derby, where his family lived and ran their funeral directors’ business – and where the business remains to this day,” Helen, who lives in Duffield, tells me. “After the war, Harry got married to his wife Hazel, had a son, Bill, and a daughter, Angela, ran the business with his brother Will, and lived to be 77. He didn’t pass away until the late 1970s but in all that time never talked about what happened to him in the First World War. Until we found this box of documents in my mum Jean’s garage, we really didn’t know anything.”

Through further research, Bec has discovered that Harry was moved around to various different barracks in the PoW camp and was allowed to receive intermittent parcels of food and other essentials from his mother, Angelina. “Unfortunately his father, William Henry Wathall, was very ill at the time and sadly passed away in Derby without ever seeing Harry return home,” Bec says. “It must have been a horrible time for Harry’s mother, with her husband seriously ill and her son being a prisoner of war.”

Bec smilingly relates a story that emerged from the correspondence. “It seems that Harry was a keen fisherman at home in Derby and before he went to serve his country, put his prize perch in the overhead toiled cistern because he didn’t trust anyone back home to look after it. Later he wrote to his mother from France, before his capture, telling her where the fish was. On his return home, he was pleased to find the fish was still alive!”

Bec, who works as PA to mum Helen, and is in charge of social media, is lo oking forward to visiting museums and places of military interest in Berlin, to expand her knowledge of the two world wars – especially as this November marks the 100th anniversary of the end of World War One. “It’s ok watching war movies but it’s so much more powerful when you discover you have a very close family connection with one of them.”

Even before researching Harry’s wartime experiences, Bec had begun to develop an interest in the subject. “When I was 12, a school trip to the Normandy beaches sparked off my interest, then we studied the First and Second World Wars in history.”

“I strongly believe that every generation needs to know what happened in the two world wars to try and ensure it doesn’t happen again. I think to some extent the terror has been forgotten and the sacrifices people made for the freedoms we enjoy today.

“Finding out what happened to my great grandfather has brought it all alive for me. Because Harry died before I was born, I’ve only seen pictures of him as an elderly gentleman. Seeing photos of the young Harry has been a revelation. He was so handsome! What he went through as an 18-year-old must have been terrifying. I can understand why he never spoke about it when he came home.”

Bec and her sister Charlotte, 21, who heads up the pre-paid funeral plan side of the business, are the sixth generation of the Wathall family to work in the firm, which was established in 1858 by Helen’s great great grandfather George Wathall. ng national Institute of Directors Awards for contribution to the community and social responsibility. She is also in the final of the Midlands Family Business of the Year Awards.

But returning to her own family history, Helen remarks: “An interesting addendum to all of this is that Harry’s brother Will went on to marry a German lady called Annie. But how, when and where they met is something we don’t know. The answer to that may lie in another box that we haven’t found yet!”