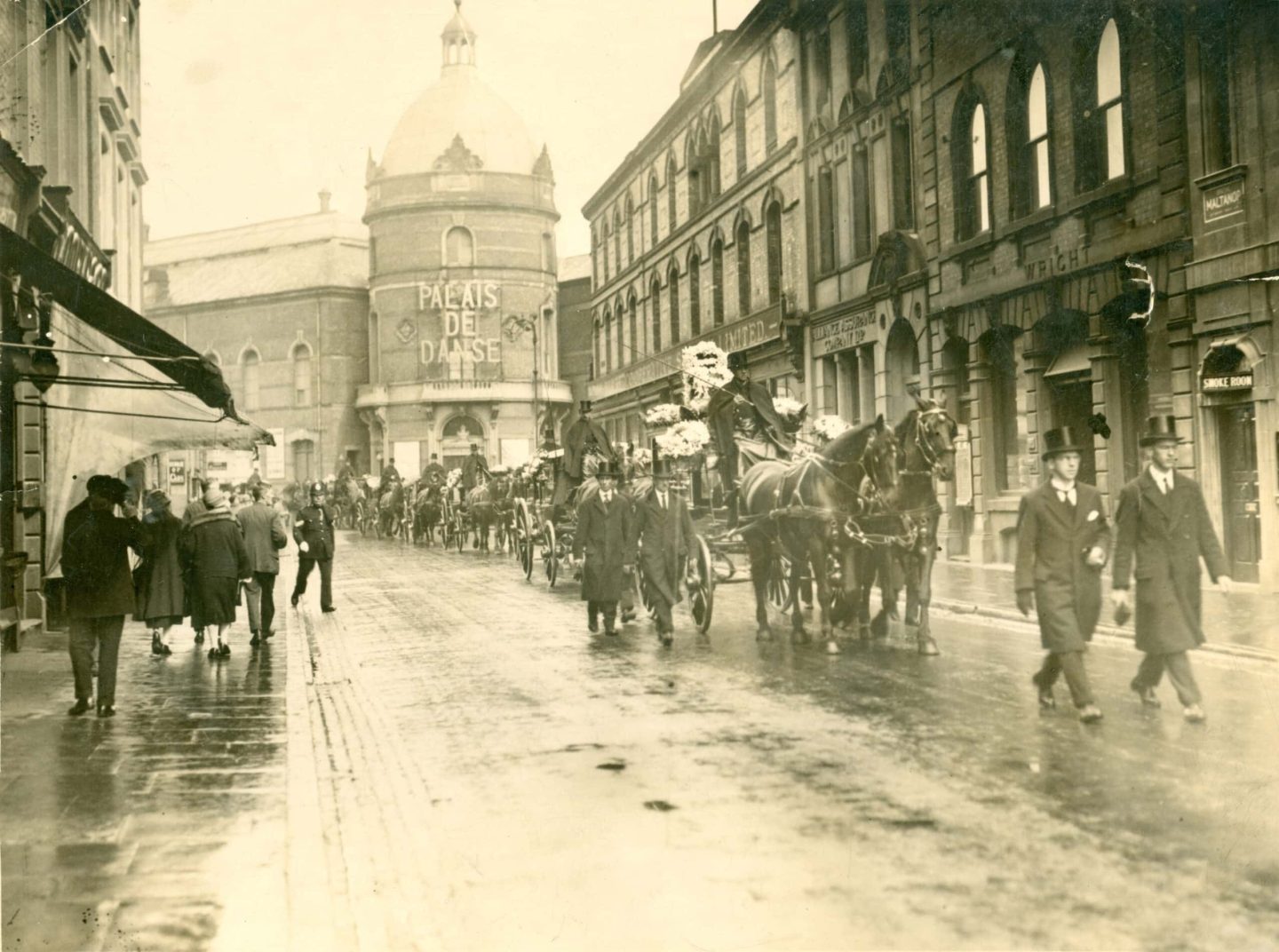 Family-owned funeral directors G Wathall & Son celebrate their 160th anniversary this year and want to hear from local people ahead of an exhibition planned for late Spring 2018.

They want to add to this with people’s own experiences with the company over the years including funeral memories, photographs, orders of service and personal experiences.

Wathall’s are the city’s longest established independent funeral directors and now have offices in Ashbourne, Alvaston and Borrowash as well as the headquarters in Macklin Street. Managing Director Helen Wathall is the founder’s great-great granddaughter and the fifth generation of her family to run the business.

She said: “We are extremely proud to be celebrating 160 years of serving our local communities and will be marking this important milestone in a number of ways over the coming months.

“A major event will be a public exhibition of our extensive archive of photographs, records and articles but we are keen to hear from local people – whether that is photographs of family funerals or a written account of their experiences with Wathall’s over the years.”

G.Wathall & Son was established in 1858 by Leonard Wathall in Siddalls Lane.  A well-known cabinet maker and furniture broker, he decided to diversify his business into funerals and his son George ran the new business in Green Street, Derby.

The firm grew quickly – establishing branch offices on London Road, Gerard Street and Normanton Road – before consolidating the business in its current headquarters at Macklin Street at the turn of the 20th century. His sons, William and Henry (Harry) took over at a very young age and it was during their time at the helm that the firm witnessed the significant change from using horses to motor vehicles.

Wathall’s was one of the first funeral directors in the area to use a motorised hearse. The change in the mode of transport brought with it major changes to the Macklin Street premises with the stables being converted into garages. The lay out today remains the same as the one which was brought about by the change in horse power.

Prior to the introduction of motorised vehicles, the firm had about eight horses stabled at the Macklin Street premises. During the First World War, the black Flemish horses were called up to serve with the Army and Harry, who fought in France with the Army, was captured by the Germans and held as a prisoner of war. He won his freedom at the end of the war.

During the Second World War the firm became part of a joint effort with other businesses in Derby to cover the possibility of civilian deaths due to any air raids on the town.

Its neighbouring premises on Abbey Street were altered into a temporary mortuary and G. Wathall & Son Ltd held coffins in stock for the duration of the war in the event of Derby being targeted in large scale air raids. Records of military funerals carried out during the war are still held by the company and will form part of the anniversary exhibition.

Petrol rationing created many problems both during and after the war. The number of vehicles used for funerals was minimalised in order to conserve fuel.

In 1952 Harry’s son, William (Bill) joined the firm at the age of 20 having completed his National Service, and slowly, over the years, William and Harry began to take a back seat until they both retired in the 1970s. Harry died in 1977, two years before his brother.

Bill, a qualified member of the British Institute of Embalmers, worked tirelessly for more than 40 years, latterly as chairman of the company until his death in 1995 at the age of 62.

All coffins were made on the premises until the 1980s when the machinery was removed. They are now bought in although they are still lined & dressed on the premises.

The firm, which has a fleet of Daimler and Mercedes hearses and limousines and several other vehicles, no longer owns any horses but hires them from a local firm when they are requested for funerals.

Helen continued the family tradition and took over at the helm after her father’s death, working alongside John Coulby until his retirement. As well as running the business, she is active in the local community and has important national roles in the profession.

In 2002 Helen became the first woman to be elected president of Society of Allied and Independent Funeral Directors.

Helen is also the Board chair of St Peters Quarter – the Business Improvement District bringing together businesses to improve the heart of the city centre.

Helen and the company as a whole have won a host of local, regional and national awards including the Contribution to the Community at the 2017 Derby Telegraph Business Awards.

Helen continues to grow the company – particularly with the introduction of funeral wishes and later life planning. She said: “Helping to encourage people to break down the taboos of talking about death is particularly important to our family.

“My father had spent over 40 years as a Funeral Director – advising families about their loved ones’ funerals and giving hundreds of talks to local groups about the importance of making funeral wishes known.

“However, when he passed away we discovered that the subject of his funeral had not been discussed with any of us.  We all assumed that someone else had the information.

“This made what was already the most tragic of situations even worse as we had to try and establish what he would have wanted, whilst mourning his loss too.

“Fortunately, the Derby Telegraph published a short obituary about him – quoting a previous interview he had given where he said he wished to be cremated.

“Sadly, we have many similar situations with the families we help. By planning ahead families are saved the stress of trying to second-guess what individuals would have wanted. They find great comfort in knowing that the funeral is carried out the way that their loved one would want it.”

Another particular initiative which is close to Helen’s heart is the company’s bereavement support services which has since been invaluable to her personally, since the loss of her fiancé Paul who died of a heart attack at the age of just 50.

She set up Derby Dandelions bereavement support group in October 2014 to provide a safe place for people to express their grief in a relaxed and social environment.

The group is free to attend and open to everyone (regardless of whether they are clients of Wathall’s or not) and meets twice monthly during the day in Derby city centre and monthly in Ashbourne.

More than 50 people regularly attend the groups which aim to be a social group for people to meet new friends and benefit from guidance and practical support on coping with bereavement.

She also teamed up with Dr Bill Webster to launch a bereavement support programme, which is a free, and designed to help people understand the grief process and the emotional pathway that they are on, and to support them in coping with adjustments to life as it is now and their “new normal”.

Other recent developments include a partnership with Derby County Football Club – offering bespoke funerals for fans.

The company continues to go from strength to strength – supported by loyal and dedicated staff which today number 30 – many of whom have been with the company for more than 35 years.

And the family ties continue with Helen’s two daughters Bec and Charlotte joining her in the business last year.

Helen said: “Six generations of the Wathall family have succeeded to the business and I am delighted that this will continue.

“Over the past 160 years, the family and staff have absorbed changes and adapted over the years to build up a solid reputation for concern for the bereaved.”

As times have changed the firm has found itself dealing with traditional and non-traditional funerals.

“By upholding the traditions of the past, we can adapt to the social changes today and in the future to continue to provide a high quality service to our local communities.”

If you have any photographs, information or memories to share with G Wathall & Son for their 160th anniversary, please send them to 101-111 Macklin Street, Derby, DE1 1LG or email joan@wathall.co.uk.